Update – this is a review for tweetbot 2.0 released in Feb 2012, not the new iOS7 3.0. If thats what you’re after here is a perfectly good review. Our thoughts are that the new tweetbot is awesome and you should all download it now.

The new tweetbot iOS app was released the other day to much fanfare. Seeing as we recently reviewed the usability and features of the official twitter app we thought is prudent to run over what appears to be at a glance real contender to replace twitters own app as an everyday alternative. So follows our Tweetbot iOS app review.

Upon installing the app, assuming you already have twitter accounts connected to your device OS, you are presented the option of adding them automatically, saving time on the usual login authentication method.

Clearly aimed at the twitter power-user, this app is fully laden with an impressive array of features. At a glance these are:

Clearly the team at Tapbots have put a lot of time and effort into understanding where the official twitter app falls short and created a very well produced, fast working, slick application.

The in-timeline preview of images is a particularly nice touch, as is the hold-press on certain elements to reveal a list of available actions. For example, holding a hashtag allows you to either filter-out all tweets using that hashtag from your stream, or compose a new tweet using it.

This mute filter feature enables blocking of a hashtag, a feature many twitter users will be glad to receive, allowing you to hide tweets from people watching #xfactor or tweeting about the #uksnow. Even better that you can set a time limit on these filters – useful if you want to block a certain person if they’re not using hashtags while tweeting like mad about X-Factor.

The number of ways to gain access to a tweets details seems a little over the top at times. Swiping right views a conversation or left views replies (the difference between which is marginal). You can also tap the tweet to access the actions bar and select the details (eye) icon, or you can double-tap the tweet to get to the same place (this view doesn’t load in the number of replies or retweets – requiring a further tap to see if anything lies behind these sections, something that the official twitter app does do). Clearly they’re trying to allow users to choose which route to the information they want to use, but sometimes too much choice can be a bad thing, and in this instance we feel the number of options is overkill and slows down the user experience.

Its technical abilities are hard to fault. But the sheer number of them makes the app feel too overcrowded at times. It would be nice to have a greater level of customisation on certain features (as they supply with the triple tap), such as setting your desired actions for the swipe left/right gestures.

The UI design is very much in the style of their other apps; a technical and industrial feel with high contrast and tactile, textured interface. If you’d asked us a year ago we probably might have preferred this styling to one presented more modestly and flat. But today our style preference here at Every Interaction is starting to sway more in the direction of a simplified UI, taking more cues form interfaces such as Windows metro and Flipboard. A trend in design Instagram made just today with their newly updated iOS app & UI.

The level of contrast and over-use of gradients and textures can be a little distracting in what is already a noisy display of data with tweets, avatars, actions and images. With tweetbot the eye has to work a little harder to scan the page and digest the information, than it does with the more subdued official twitter app UI – whose more tranquil tone aids tweet readability. 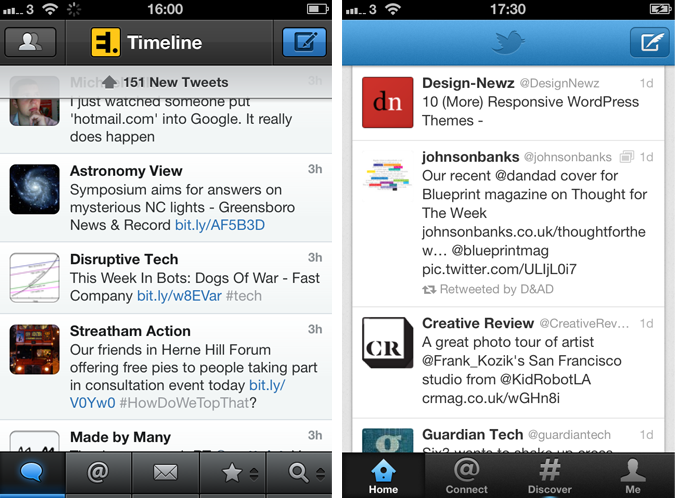 One other thing I think the official twitter app does better is the new ‘connect’ (@) tab – blending mentions, new follows and favorites into a (still filterable to view only mentions) about you stream. Something we think Tweetbot would benefit form adding.

Apart from these few niggles we think the Tweetbot app is a superbly produced application and we believe we’ll be using it day-to-day over the native twitter app. The next killer feature that this (or any other twitter client app) might be adding to further increase its usefulness might be in-app camera tools. A twitter client that brings it’s photography power inline with apps like Path, or Instagram (which in it’s new form released today adds a Lux filter), providing direct access to filter styles and tilt-shifting will truly be a powerful player in the market.

Where we think Tapbots have missed the boat on this one is in making a more customised experience for the iPad app. As the official twitter client update has yet to appear for iPad, users are desperate for something better and the tweetbot app although good, feels just like the iPhone app scaled up, not utilising the additional screen real-estate as well as it has done. The composition screen takes over the interface and you cannot load links while you continue to scan your timeline. Many more improvement opportunities available here, but we’re thankful to have an alternative to the now old and feature poor feeling official twitter iPad app. Annoyingly tweetbot is not a universal app, making them separate purchases – surely a tactical decision to maximise app revenue, but one we’ll let slide as these things are not cheap to produce and it is very well produced and worth paying for, even twice. 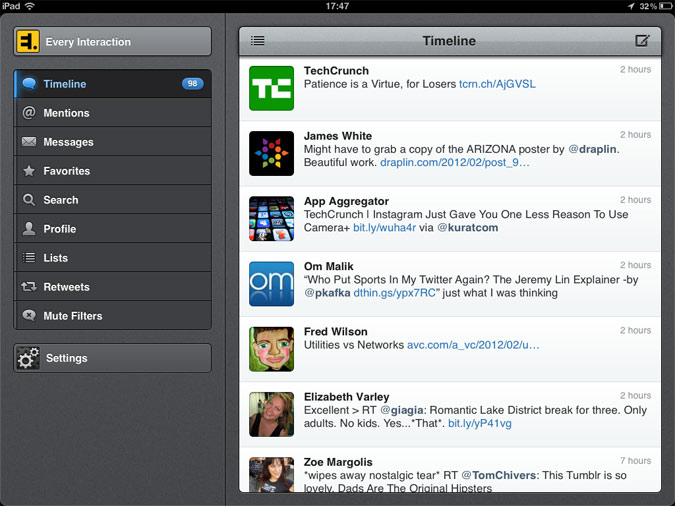 Have you tried Tweetbot? What in particular do you like about it’s features and UI, and what might you change?