Anyone who works around the Silicon Roundabout is familiar with the noise of building work. It’s happening all around and the amount of old buildings coming down and new ones rising up is accelerating fast. One of the reasons for the surge in new office space in Old Street is the demand created by the Silicon Roundabout buzz of startups and tech companies moving in.

This is great, but one of the main reasons the small businesses and startups are attracted to the area other than the community is the amount of relatively affordable office space. The long-neglected, previously mostly unfilled old warehouse spaces and offices are now packed to rafters with companies wanting to have a base they can afford in a thriving hub. Many small companies like ourselves have moved into shared office spaces such as Shoreditch Works and Tech Hub amongst others which further help to build the community and makes affordable desk space even more attainable.

As much as I appreciate redevelopment for creating jobs in construction and boosting the local economy by attracting higher rent payers, we are soon to be faced with a shortage of affordable office space in the area which will inevitably result in prices rising across the board and the relocation or fragmentation of the startup & small business community from the Old Street area. This worries us. We love the area, the community and the benefits it brings, such as being in walking distance to the majority of our clients. We’re prepared to travel more to see clients, but we don’t want to lose our community in the process.

Epworth House; the building we currently occupy as part of Shoreditch Works, itself is due to come down, in fact it should already have come down but as with such large projects the plans are being revised and demolition has been delayed, but not put off forever. Tech Hub in Sophia House have been given their final notice on the space (admittedly they are split between there & Campus, but there’s only so much room at the Google Inn) and despite several extensions due to delays there, they will soon be left looking for a new home too. 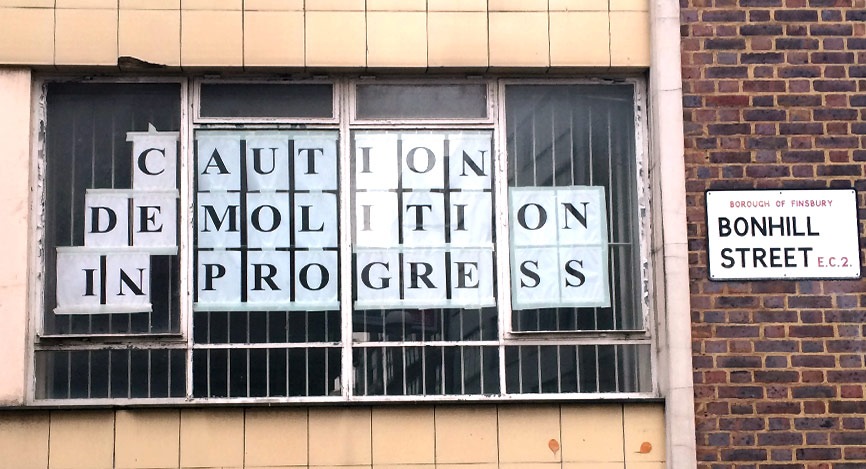 The Government are keen to boast London’s prowess as a centre for technical innovation and rising new companies, but what are they doing to help ensure we all have somewhere to work so that all these economic contributors, large & small have opportunities to thrive? The investments they are making only contributes to the lack of affordable offices. Should there be similar regulations as we have for housing in that new builds can be made as long as a certain percentage of affordable homes are provided. Such a system would help the small business owner and encourage growth. Or are we all destined to be pushed out further from the city and our community fragmented, possibly with disastrous effects on the startup scene as a whole in London?

Obviously, we’re worried about the future of Silicon Roundabout, and where our business might be in years to come. Clearly there’s not a future in endlessly occupying derelict buildings, but to keep this entrepreneurial spirit and the core of the fabulous community we’ve all built up here, we need to make sure the small guys don’t get pushed out. We don’t have a solution, but we’re sure looking for one. What do y’all think?

We’ve tried mapping the known proposed, current and recently completed building projects in the area where new, expensive office space has been added. This is only based on our lunchtime food-hunts, so please help us grow this map to it to get a wider picture of what’s going on around us.

Contribute to the map

Update 11th March 2014
This topic was later written about the Guardian, and then followed by an interesting counter-argument by Leo Mirani.

Further reading…
Spiralling rental costs pushing start-ups out of the Old street area and further out of London itself, CityAm.
The distribution of startups located in London is shifting, CityAm.