In his “2017 Design in Tech Report,” John Maeda writes that “code is not the only unicorn skill.” According to Maeda, who is the head of computational design and inclusion at Automattic and former VP of design at VC firm Kleiner Perkins, words can be just as powerful as the graphics in which designers normally traffic. “A lot of times designers don’t know that words are important,” he said while presenting the report at SXSW this weekend. “I know a few designers like that–do you know these designers out there? You do know them, right?”

By pointing to writing as the next most important skill for designers, the report suggests a corrective to an overreliance on the interface–to the extent that writing itself has been left behind as a design skill. “A core skill of the interaction designer is imagining users (characters), motivations, actions, reactions, obstacles, successes, and a complete set of ‘what if’ scenarios,” writes designer Susan Stuart, in a blog post highlighted in the report. “These are the skills of a writer — all kinds of writers, but particularly fiction, screenwriting, and technical writing.” 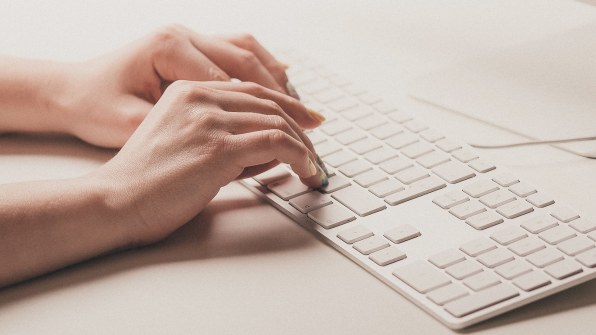 Learning how to write isn’t just an important skill for the future: It’s applicable right now. Trends in digital design emphasize clean lines and few words–giving language itself more weight. “Art direction and copywriting are as fundamental to the user experience as the UI,” as Paul Woods, COO of the digital design firm Edenspiekermann,wrote here on Co.Design. “Sure, you can have a beautiful UI/frame, but once you have that (we all know a great UI is an invisible UI), all the viewer cares about is what’s inside: the artwork, the story.”

It’s not just that designers should treat their copywriters better, as Maeda mentioned at his Design in Tech SXSW talk. As chatbots and conversational interfaces become more popular, writing becomes the vehicle for experience design–so much so that writers are being integrated into those design teams. Companies are already starting to use AI to customize language for users on a mass scale. This writing-based design could transform the very nature of UX.

“We talk about the power of words—both content and style—all the time,” writes R/GA brand designer Jennifer Vano in blog post featured in the “Design in Tech” report. “When it comes to friendships, romance, work dynamics, and, dare we even mention it—though nothing is more telling, more relevant—politics, words have the power to change our opinions, incite action, divide or unify us, move us. Words can shape reality.”

As a well-known voice in the design world, Maeda’s report will help cast light on the issue–but design schools also have a role to play, as well. The report details how design education is falling short in other areas, as well. For instance, the top three skills needed by designers in practice–data, business, and leadership skills–are not available to them in most basic coursework.

This article was originally posted at:
https://www.fastcodesign.com/3068938/forget-coding-writing-is-the-new-unicorn-skill

Emulation Is Not a Product Strategy